When I told a friend that I was excited to watch the ESPN documentary series about Michael Jordan and the Bulls, The Last Dance, she was shocked.  “You want to watch a show about basketball?” she said.  “Oh, that’s right — you’re from Chicago.”

To Chicagoans, Michael Jordan’s legacy looms as large as the Sears Tower in the skyline.  He and the Bulls are as synonymous with Chicago as Al Capone and deep-dish pizza.  From 1991-1998, Jordan, along with a dream team that included Scottie Pippen and Dennis Rodman, with coach Phil Jackson at the helm, led the Bulls’ franchise to six NBA championships in the span of eight years.  The Bulls were the first team in the NBA in over 30 years to boast such an impressive championship streak.  (Only the Boston Celtics in the 1950s and 60s eclipse the Bulls in their record).

ESPN’s new series, The Last Dance, focuses on the run-up to the Jordan Bulls’ final championship win in 1998.  Coach Phil Jackson dubbed the ’97-’98 season “the last dance” as he, Jordan, and other key players had announced at the start of the season that they would depart after its completion.   The series combines footage of the Bulls during their 90s prime with present-day interviews from the players, journalists, celebrities, and family members who were a part of the Bulls’ magic-making.  A bulk of the archival footage is from the ’97-98 season during which the Bulls granted NBA Entertainment unprecedented behind the scenes access to the team.  This footage sat on the proverbial cutting room floor for nearly two decades, until in 2016 the right producers, including Jordan and LeBron James, came together, and the footage was used to create the ten-part series.  (James fast-tracked the series’ release to satiate basketball fans during the NBA’s COVID-19 hiatus).  The Last Dance does not simply rescue forgotten sports reporting from the annals of history.  Rather, the series demonstrates the emotional bandwidth required to create the Bulls’ legendary record and unveils how controversial leaders produce spectacular results. 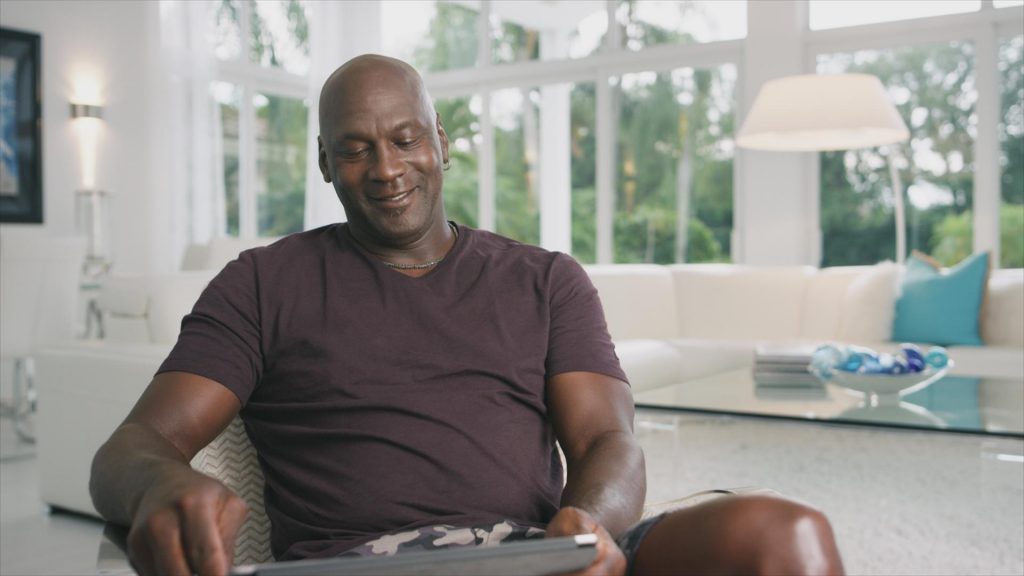 Michael Jordan reviewing video commentary from former teammates during a scene in “The Last Dance.” Image courtesy of Deadline.

For most, a sports game is like the stock market: one can intelligibly predict its direction, but it ultimately responds to forces beyond one’s control.  Michael Jordan is a force beyond control.  During the opening scene in episode nine of The Last Dance, the Bulls are playing a game against the Indianapolis Pacers, a team they would later face in the 1998 Eastern Conference finals.  The game is early in the career of the Pacers’ future star, Reggie Miller, who plays remarkably well in the first half.  Michael, by contrast, is playing an uncharacteristically average game and overhears Miller say so.  Jordan responds by dominating the second half and winning the game.  Walking off the court, Jordan says to Miller, “Don’t ever talk trash to Black Jesus.”  In calling himself “Black Jesus,” Michael invites the comparison of his talent and power on the court to that of a religious being.  Miller never called Jordan by his first name ever again.  After that encounter, Miller would refer to him as MJ, Black Jesus, or “The Black Cat,” confirming Michael Jordan’s otherworldliness.

Michael Jordan and Reggie Miller of the Indianapolis Pacers face off. Image courtesy of CBS Sports.

The mantra of “Black Jesus” was not to love thy teammate.  Michael Jordan’s athleticism has been discussed at length; he shoots a three-pointer with the ease of a layup and jumps to such heights that he earned the nickname “Air Jordan.”  Yet his successes often overshadow his controversial persona.  In a recent article by Sam Walker in the Wall Street Journal, Walker poses the question as to whether Jordan was a “brilliant leader” or simply a bully.  Ask teammate Will Perdue, and he would say Jordan was an “outright jerk.”  Many scenes in The Last Dance show Jordan lashing out at his teammates during games and practices, but his leadership of the team is more complex than just the aggressive moments The Last Dance depicts.  It is important to note that Jordan did not captain the Bulls’ ship alone.  In the ’90-’91 season, the first season the Jordan Bulls won the NBA championships, center Bill Cartwright was named co-captain along with Jordan, who had previously held the title alone.  Cartwright was a perfect foil for MJ: quiet and unassuming, where Jordan was arrogant and brash.  Creating a co-captainship in combination with Phil Jackson’s legendary offensive “triangle” taught Jordan to share his water dish, even if he did so begrudgingly.

Jordan now acknowledges that “Bill made the difference,” and basketball fans well know the success of Jackson’s “triangle.”  Sharing is caring!  Walker compares Jordan to Steve Jobs, another fearless leader who never apologized for his tyrannical ways.  While Jobs’ life ended too soon to afford him much self-reflection, Jordan has the opportunity to look in the rearview mirror.  In episode seven of The Last Dance, Jordan comments, with tears in his eyes, “That’s how I played the game.  If you don’t want to play that way, don’t play that way.”  While not an apology, the outward display of emotion suggests that “Black Jesus” is not immune to criticism; while his co-captainship and acceptance of the “triangle” shows that even the son of the basketball gods needs a disciple or two.

Bill Cartwright and Michael Jordan play against the Detroit Pistons in 1990. Image courtesy of Associated Press.

If Michael Jordan is the Sears Tower, then Scottie Pippen is the John Hancock building: similarly designed and equally as critical in the city’s fabric. Scottie Pippen was an integral team member to the Bulls’ championship success and always seen as the team’s second in command after Jordan. Fittingly, the second episode of The Last Dance focuses on Pippen.  Jordan says, “Whenever they should speak Michael Jordan they should speak Scottie Pippen.”  Jordan looks on his relationship with Pippen with admiration and affection, calling him his “partner” and a “pleasure to play with.”  The two have remained close.  Jordan presented Pippen with his hall of fame trophy in 2010, and Pippen attended Michael’s most recent wedding in 2013.  Throughout the Bulls championship run, Pippen ranked 2nd in scoring, rebounds, and minutes played, and 1st in assists and steals.  His record demonstrates that he was the ultimate Robin to Jordan’s Batman.

Pippen is inducted into the Basketball Hall of Fame with Jordan at his side. Image courtesy of NBA.

If Michael and Scottie were Batman and Robin, then perhaps Dennis Rodman would best be described as the Batmobile, the vehicle that enabled the heroes to go on their dark night missions.  Dennis Rodman came to the Bulls in 1995 by way of the Detroit Pistons and San Antonio Spurs, where he was a star defensive player.  He had been a force for the Bulls to reckon with as an opponent, especially during his Pistons days, with whom the Bulls were fierce rivals.  While the Bulls welcomed Dennis with open arms, Rodman was a wild child.  He changed the color of his hair depending on his mood or the occasion.  He constantly graced the cover of tabloids, due to his high-profile relationship with Madonna and brief marriage to Carmen Electra.   His most notorious prank, however, was when he married himself in 1996, a stunt pulled while promoting his then memoir.  When Carrie Bradshaw said the most important relationship in life is the one you have with yourself in the final episode of Sex and the City in 2004, she must have been taking notes from Dennis Rodman!  Rodman took the game seriously, but he imbued the Bulls with his bad-boy tendencies, clashing with Captain Jordan and Phil Jackson on many occasions along the way.  But Rodman gave the Bulls star power and humor that proved integral to the Bulls’ lasting fame.

Rodman with his signature hair. Image courtesy of Getty Images.

After the Bulls won their sixth championship, the team knew their reign was over. In the tenth and final episode of The Last Dance, following their 1998 win, Phil Jackson, whose wife had a master’s in social work, invites the team to his house where they engage in a ritual his wife had used for grieving patients.  Each team member wrote something that the team meant to them on a piece of paper, which he would then recite to the group.  Jordan wrote a poem.  Steve Kerr said he had never seen Jordan, who he had thought was a bully, demonstrate such “compassion and empathy.”  At the end of the ritual, the team put their pieces of paper into a coffee can which Jackson then set ablaze.  The last dance was complete.

Rodman, Pippen, Jordan, and Jackson with their 1998 NBA Championship trophies at a celebration in Grant Park. Image courtesy of Chicago Sun-Times.

Liza Minnelli once sang that “everybody loves a winner,” and everybody simply loved the 1990s Chicago Bulls.  The Last Dance and the Jordan Bulls were emblematic of a moment during which the city of Chicago was united not in despair, but in love. When the team won their final championship in 1998, someone turned over a car on Division Street in front of Butch McGuire’s — the joy was so overpowering that fans had been endowed with superhuman strength!  In 2001, when I was at Latin, his children came to visit the school to see if they would like life in the city instead of Highland Park.  While Jordan’s family remained in the suburbs and did not end up becoming our classmates, I will never forget the excitement that reverberated throughout the school that day.  Three years after their last win, and we all still wanted to be like Mike.  Two decades later, we still do.